Griplock® Systems has been a market leader in the Cable Suspension Industry since 1992. We are committed to providing high-quality, high-performance and budget-conscious products, backed by outstanding customer service and engineering expertise.

State-of-the-art components and elegant, functional designs combined with rigorous quality control are the keys to our success. Safety, quality and style.

This is:  The Art of Suspension®

See what our Customers Are Saying. 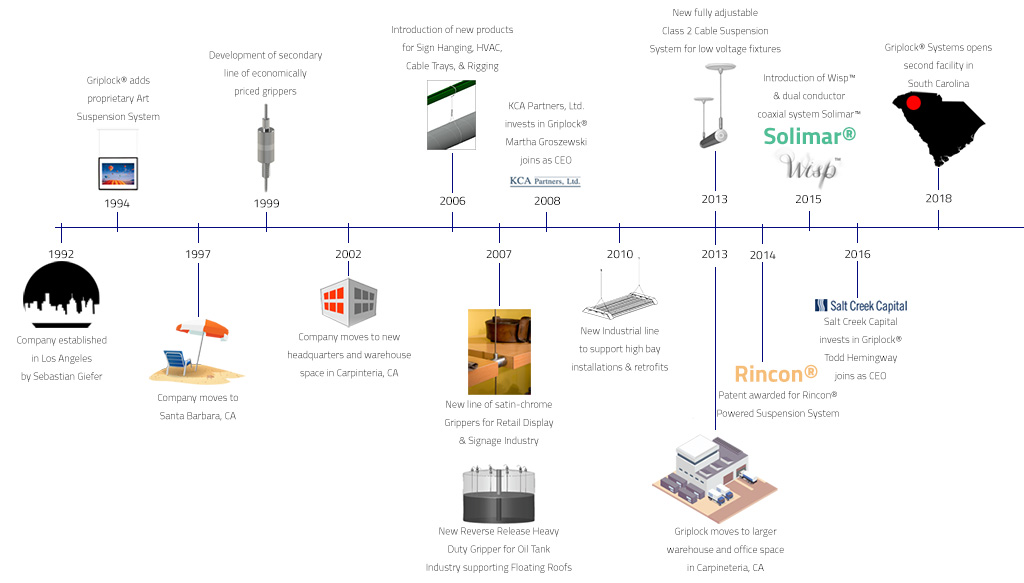 Established in Los Angeles by Sebastian Giefer, Griplock® Systems begins designing and marketing adjustable cable suspension systems, primarily for the Linear Fluorescent Lighting and Theatrical Rigging Industries. Griplock® partners with Reutlinger GmbH of Frankfurt, Germany to manufacture an exclusive line of Griplock Grippers for the North, Central and South American markets. Established in 1873, Reutlinger GmbH of Frankfurt, Germany, one of the oldest wire cable manufacturers in Europe, introduced its cable-gripping system over 20 years ago.

Griplock® introduces a Reverse Release Heavy Duty Gripper to the Oil Tank Industry for use in supporting Internal Floating Roofs.

Griplock® Systems moves to a larger warehouse and office space in Carpinteria, CA to keep up with growth.

Griplock® introduces Wisp™. A combination of the smallest grippers (Type 10 and Type 12 ) and the thinnest aircraft cable on the market.